"KING OF THE DRUMS"
The Early Days 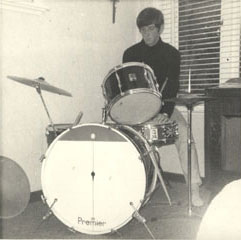 Rex began playing drums in 1966 and was self taught for the first two years.  From 1968 until 1970 he studied with various local drummers. Rex left high school in 1967 and became an apprentice pipe organ builder and tuner. .After becoming fully qualified in 1971, he went to New York and studied with Jim Blackley at his School of Modern Drumming. Jim now resides in Toronto.  The inspiration from these studies was responsible for the start of Rex's professional drumming career. Rex returned to New Zealand in 1972 and toured with The Kal-Q-Lated Risk, Gray Bartlett and the associated stars of the time, and English tenor John Boulter.  These tours were followed by some long term residencies around Auckland.  He began taking his first students during this time.

In 1980 Rex lived in London and worked with an Irish rock band and free-lanced with some well known musicians and performers.  On returning to New Zealand, Rex and long time friend, bass player, Tiny Thompson, formed a band The Kybo Glyderz, along with guitarists John Kristian and Neil Edwards.  They played a residency for 18 months and various forms of this lineup continued performing through the 1980's.

The Rex McLeod School of Drumming is Born

Rex began teaching drums again and in 1982 established the Rex McLeod School of Drumming.  During the late 1980s and early '90s, Rex worked as a free-lance drummer with bands including: Black 'n' Blue, Texas Kiwis, Bandit. Rebels Without Applause, Earthbound, Rodger Fox Big Band and artists Sonny Day, Tommy Adderley and Al Hunter (with whom he had also worked during the late 60's).  Later on, while working with The Sam Ford Verandah Band, Rex played drums on Sam Ford's and Neil Findlay's contributions to the "Deep  in the Heart of the Pacific" compilation CD.  During this time, along with Tiny Thompson, Al Young and Neil Findlay, he started The Great Blues Adventure. This band performed for many years at festivals, bars and clubs.
The Drum School continued to grow throughout this period and Rex now teaches six days a week.  In 1987 he became an Associate member of the Institute of Registered Music Teachers of New Zealand, AIRMT. Rex was  first drummer teacher to be registered in NZ. Through the years he has also taught drums at various Auckland secondary and intermediate schools. Since late 2007 Rex has been the Drum Teacher at St. Kentergin School in Auckland.

In 1995 Rex attended the New Orleans Jazz and Heritage Festival and The Modern Drummer Festival Weekend (Clinics and Workshops by some of the worlds top Drummers) at Montclair State University in New Jersey. He also had some individual drum lessons with Mike Clark (Herbie Hancock's Headhunters and many other groups) and Ricky Sebastian (Dr John, ) at The Drummers Collective in New York. In 1999 Rex returned to the U.S.A. to New Jersey for another Modern Drummer Festival Weekend and again in 2003 to attend PASIC, the annual Percussive Arts Society (PAS) International Convention, four days of clinics and workshops of anything "percussionable" by many of the worlds best at whatever percussion instrument they are playing. Later on in 2003 Rex became the President of the NZ Chapter of PAS.  Through these experiences, independent studies, and many years of playing Rex has a wealth of knowledge to pass onto his students. 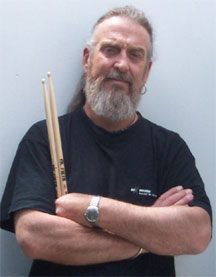 From January 1998 to January 2001, Rex played drums for The Dogs Bollix Band (Irish/Celtic music) at The Dogs Bollix Bar in Auckland City.  During this time, John Segovia, the bass player, asked Rex to join a band he was playing guitar in with Andrew "The Rev" Campbell on harmonica and Simon Kearns on bass, called The Lazy Boys playing vintage electric blues. This band is still performing.

Around 2003, Rex and his old mate, Bass player / Vocalist extrodinaire, Tiny Thompson, with whom he first gigged with back in 1968, asked piano player Max Purdy to form a trio. Rex had played with Max back in 1967 for a few years with the Barney Clarke Trio and  was very  pleased to be playing with these two old friends again. This band became The Rum 'n' Boogie Band.
This band was very refreshing for Tiny and Rex, to have no guitar and  Max's boogie woogie style piano playing out the front was quite special.  The band made a CD :"On The Air"  This sold out but copies can be made. Contact Rex. The Rum 'n' Boogie Band became The Junkyard Angels with the addition of Neil Finlay; guitars, vocals, harmonica, Ron Stevens; Hammond organ and Neil Edwards (Kybo Glyderz); guitar and vocals.This band  recorded a CD at Ron's barn in Huapai, Auckland, NZ. Copies are still available through Rex. Tiny, (Ian Thompson), passed away in 2009. The band went into recess shortly after but it is hoped that a Junkyard Angels gig, "Remembering Tiny" will take place in the Summer 20012/13.
In 2006 Rex joined The DeSotos  playing and touring with them until March 2009. Through this period he recorded the album  "Cross My Heart". This album had some good reviews
Not long after leaving The DeSotos, Rex joined The MIdnight Blues Band; The Reverand BG White; guitar and very powerful gravelly vocals, Dave Cheetam, guitar, George Komene bass.This band was on the heavier side of the blues and played a good mix of covers and originals.Their final and very memorable gig was at the very last Mission Bay Jazz and Blues Festival in Feb 2011. During the evening they were joined by guests, including Darcy Perry and Edwina Thorne, great way to go out. There have been recent rumours of a Midnight Blues Band Reunion coming up, stay tuned.
During his time with The Midnight Blues Band, Rex did a couple of gigs with the Neil Finlay Trio and was also playing with singer/songwriter, Donna Dean., playing the gigs on the back of her award winning album "What Am I Gonna Do" This album had some critical aclaim. During his time in The Donna Dean Band, Rex got to play with some very good musicians including, Janek "Buck" Croydon, pedal steel and other guitars; Tony Dee, upright bass; Bernie Griffen, vocals and guitar; Dave Khan, just about everything!; Bruce Lynch, upright and electric bass; Warren Mendonsa and and Peter Parnham, guitars. Donna has since moved onto Melbourne.
Around August 2011, Dave Cheetam from the Midnight Blues Band, asked Rex to join his new band, Black Dog, Once Rex heard he had Steve Sussex on Bass and Mark Foster on Vocals and Harmonica, Rex was into it!. Dave and Mark are writing some great songs and Rex is really enjoying the process of putting the originals together, and performing them to appreciative audiences.
Last October 2011 Rex went to the USA to attend a Midnight Ramble at the home studio of drummer Levon Helm in Woodstock, NY.. The Rambles are concerts by Levon's incredible12 piace band, along with many guest artists. Rex was very fortunate to get there when he did as Levon passed on in April 2012, RIP.
In recent times Rex recorded two albums with Max Purdie on Piano. The first in 2005, "Ronnie & Max Together" with American singer Ronnie Taylor from Atlanta GA.  Ronnie had always wanted to record an album of his favourite love songs and this is it. Rex really enjoyed recording with someone of Ronnie's calibre. The other was in 2010 with Petra Rijnbeek (along with Max they work under the name Chicane), called "Chanteuse". This was Petra's collection of jazz standards. Petra has a great voice and well worth a listen anytime. If you want a copy of those albums contact Rex.

Rex is playing, mainly with Black Dog and the Drum School is as busy as ever. Rex is willing to take on all students from beginners to those with experience, of any age.  He also understands that students take up drumming for a variety of reasons: to be a pro musician, to have fun, to relieve stress, etc, and is prepared to work with students with these and other objectives.  Rex also has a special interest in students with learning and/or co-ordination difficulties and feedback from parents of such students has been very positive.

Artists, musicians and bands Rex has played with (Gigs and Jams)