“I've studied with Rex from the very first day that I started to play drums. Not only has he introduced me to a gigantic and diverse range of beats and styles, he has inspired and fascinated me with his incredible ability to tell one hell of a story!. Through the many years studying with Rex I have developed into the drummer I am today. Rex has instilled in me a great passion for drumming that I'll cherish the rest of my life. Thank you Rex (Tom Jennings, Rex's Student 2006 to 2010, he then went overseas and on his return did more study with Rex 2012 to 2013. Since then Tom has been living and playing drums in Berlin) ”

Tom played with The Psychs. He played on their album released this year (2015)

“I had wanted to learn the drums for years and when I finally got round to getting lessons I was really nervous about getting teacher that would be hard on me. Rex was recommended by a family friend and he could not have been further from what I had been scared of. Rex is such a friendly and patient teacher and makes lessons enjoyable. Even when I have not done as much practice as perhaps I should have he is never disappointed or upset. Not only is he a master of his craft, but Rex is an awesome person too and I am so glad to have found him. (Aimee Wiltshire Rex's student, 2013 to current)”

“I started playing the drums at the age of 32 and despite taking regular lessons back home in Switzerland progress was initially very slow. A year later - in spring 2013 I had the chance o take a longer break from work. What better opportunity to combine extended travelling with some intensive drumming So I starting looking online, checked out different countries and teaching options. When I found Rex's website I sent an email right away - and got feedback within 24 hours. It included all the info I needed and Rex even offered the use of his practice room after lessons which allowed me to make the most of my trip. On the day of the first lesson the positive feeling I had when emailing Rex was proving to be right. After setting up in his wonderful little studio/practice room we got into practicing right away. The relaxed, motivating and cheerful atmosphere really helped to shake off my initial nervousness and insecurity. For the following 2 weeks I had the great pleasure of studying with Rex almost every day. We touched on different musical styles ranging from Rock and Blues to Hip-Hop and Reggae. Rex's wide musical knowledge and interest combined with an excellent library of notes and transcriptions allowed me to set an excellent basis for practice back home. With Auckland, NZ being pretty much on the other side of the globe it is not that simple to continue studying with Rex. However, his passion for playing and teaching the drums is infectious and I will certainly be back soon. (Philipp is returning for more lessons in late 2015). ”

“Our son started drum lessons with Rex when he was 8 years old and continued through to when he was nearly 11, when we moved out of Auckland. Our son has Asperger's Syndrome, and isn't the easiest child to teach, as he quickly gets frustrated and upset. Rex was very patent and understanding, and never lost his cool. He had great strategies for engaging Fionn on the bad days as well as the good, with a great mix of fun times and challenging him to develop. It was amazing to see our son develop under Rex's tuition, and very sad to say good bye at the end.(Fionn was Rex's student from 2013-2014).” 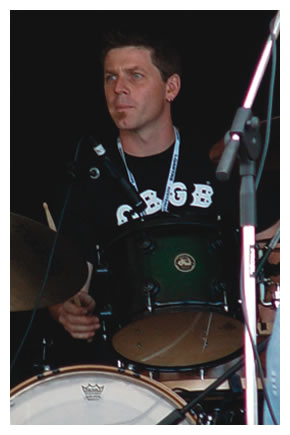 “When I first came to Rex I found myself in a musical rut playing the same old beats due to my limited musical knowledge.Rex taught me how to read and opened up an endless world of possibilities, he has a sound knowledge of all musical styles and a fantastic library of resources & media to back it up. Regardless of genera Rex can help you improve with technique and the un-written nuances of your style.Above all Rex has a passion for his craft and combined with the relaxed atmosphere of his well-appointed studio and personal brand of teaching; you won't regret seeking this man out for instruction of the world's greatest instrument - The Drums. ” 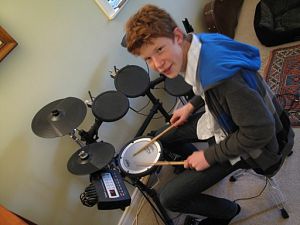 “I have been learning with Rex for coming up to six years, I have weekly lessons and every time I arrive he is there to greet me with a smiling face and a happy attitude. I play in a band at my school and no matter how difficult the piece I show him, he can play it within seconds of reading through it. Not only is his playing great but he can turn that into teaching which I find very easy to follow. I have had two other teachers and neither of them were as fun to learn from or as easy to follow. He is very knowledgeable about all kinds of different rhythms, weird and different time signatures and he knows styles all the way from rock to latin and funk. Every week I look forward to my lesson and when I get there I am not disappointed, Rex is always sociable and fun to talk to and I think he is a great drum teacher. ”

“As a complete newcomer to drumming at 47, I didn't know what to expect. I started off with a gift voucher for 4 lessons and 2 years later I am totally hooked. (Neil White Rex's student 2010 to current)” 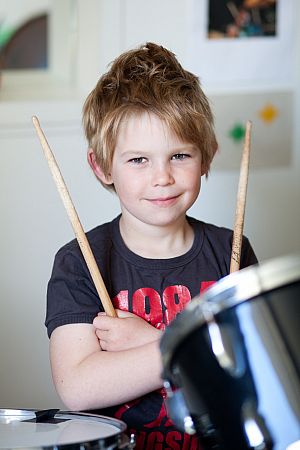 “Drumming is awesome! Rex is the best teacher, he makes it fun and easy. (Frankie Creagh-Leslie, Rex's student 2011 to current)”

Check out Frankie playing along with Tom Petty!

“"When I was first starting out back in New Zealand I wasn't too sure who to get lessons from. Some drummers that I really looked up to recommended Rex so I made a call and found someone who was welcoming, non judgemental, and treated me as an individual. I loved his studio space and his wonderful collection of vintage drums. Rex was more of a mentor than a teacher who guided me through the foundations of drumming, good timing, groove and an awareness of the music. These were always paramount in Rex's teaching. Moving to the UK back in the mid 90's I have travelled and played around Europe & the US with a number of good players, one very special artist was James Hunter who who had always commented on my feel and use of dynamics. Ive gone on to play with Violla Wills, Gordon Russell (Dr Feelgood), Astrid Williamson, Camille O'Sullivan, Van Morrison, Bap Kennedy, to name a few and was invited to teach at BIMM (the Brighton Institute of Modern Music) back in 2005 where I have written the reading and Jazz syllabus for the BA courses for drummers. I have also set up Tiki Drums here on the south coast of England in Brighton where I now build and restore drums and run snare drum building workshops, this allows me the freedom to stay closer to home than my earlier days of touring. I thank Rex for instilling in me the confidence to believe in myself and sticking the course. I'm still learning as one always does and on a very special trip two years ago I had the opportunity to study with the wonderful Jim Blackley, in Toronto, Canada. On my arrival to Jims I was presented with a copy of the New Zealand produced Drum Connexions magazine and on the cover was Rex, I had no idea that Rex had studied with Jim back in New York in the 70's, funny how these things come full circle." (Preston Prince, Rex's Student 1996, now lives Brighton, England) ”

“My son started drum lessons with Rex when he was 8 years old and continued through to when he was 11.5. He always looked forward to his weekly session with Rex as he was very encouraging and supportive with his teaching and went out of his way to build a relationship that was meaningful to our child. He helped us buy our first drum kit and even came to our house one day to check that our drums were set up correctly with a few adjustments making all the difference. I have no hesitation in recommending Rex as a great teacher who cares about his students and takes the time to get to know them, two things which made a real difference to my sons love of learning music. (Ben Klass, Rex's student 2007 to 2011) ” 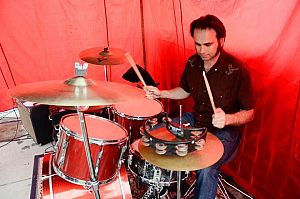 “I would always be bringing him some obscure song I wanted to learn and from me sitting at home unable to work it out I would then take it to Rex and would soon have the pattern worked out and written down. I not only appreciated his technical ability in what he taught me but more valuable to somebody wanting to become a complete all round drummer was the wide range of musical topics we covered.Rex has lived, breathed and played the beat to it all. (Chris Kemp Rex's student 1996 to 1997 then, over the years, many casual lessons to work those songs out!) ”

Chris has played with Labretta Suede and the Motel 6,  All Torn Up 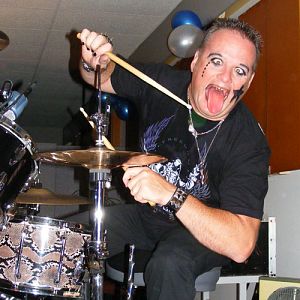 “Being a master craftsman of his trade, Rex enabled me as a 40+ wannabe drummer& to realise my boyhood dream. Rex's knowledge of the music industry, dedication to his students, and above all the patience he extends while tutoring, has helped me and many, many others pursue their desire to play and perform on what is the 'engine room' of instruments - whether its syncopation, rim-shots, triplets or paradiddling....Rex will have you beating the beats in quick time no matter what the genre you are into! (Bryce Purdy, Rex's student 2004 to 2007) ”